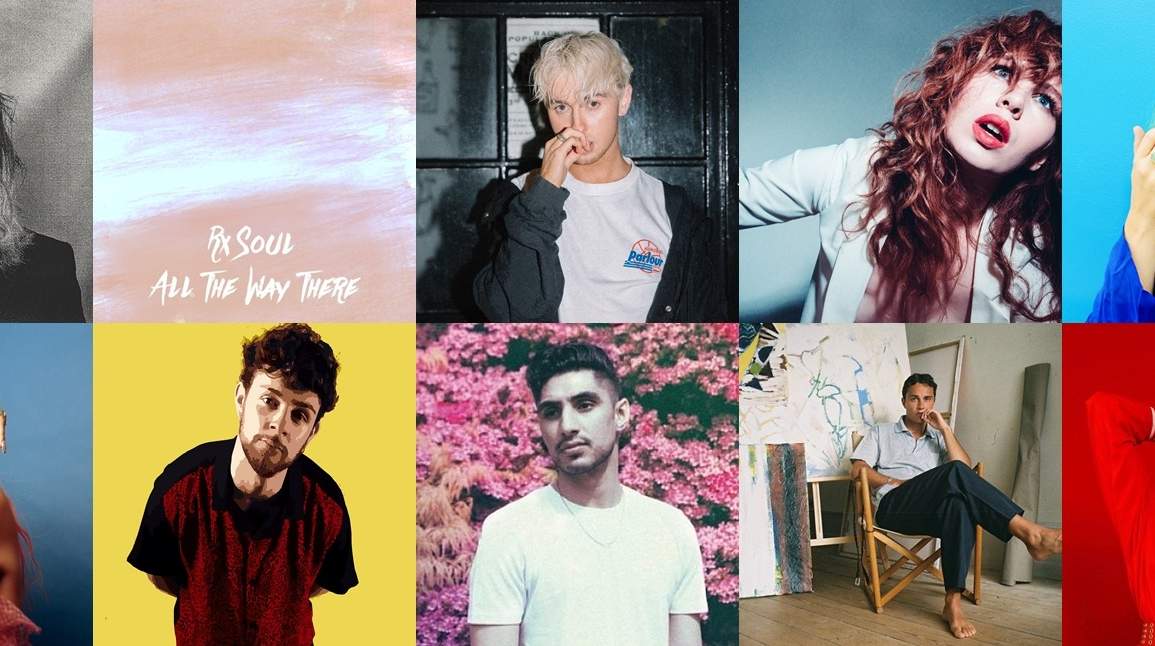 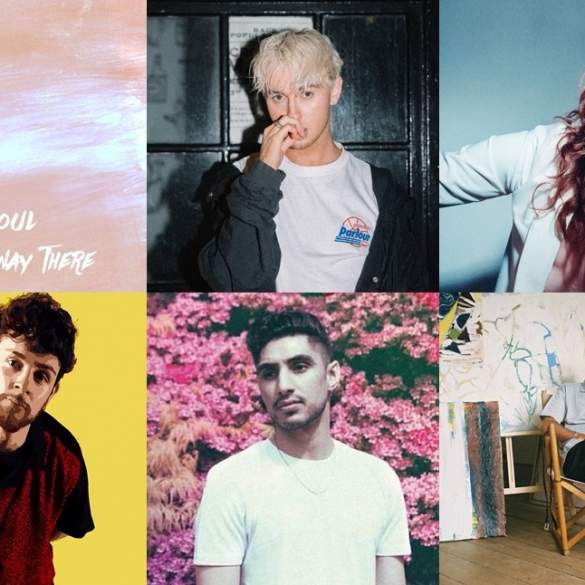 Bedford’s singer-songwriter Tom Grennan first found a little bit of fame in 2016 as the guest vocalist on Chase & Status’s track “When It All Goes Wrong”. That record gave Tom the opportunity to cut his teeth in the hottest radios of UK with his own songs and show his raspy vocals and all those influences from soul and blues.

Almost two years after that breakthrough song, Tom Grennan will release his highly awaited debut album “Lightning Matches”. The opportunity to show his raspy vocals and all those influences from soul and bus that he has.

2018 has to be the year of Grace Mitchell, a young 20 years old singer and songwriter from Portland, Oregon. Her style is somewhere between alternative-rock and pop, but her voice is her sign of identity.

Mitchell’s output this past year has not only been prolific, it’s also been striking in pop excellence: “Come Back For You” was the stunning ballad to dance and cry at the same time, “Kids (Ain’t Alright)” was rebel and grunge, “Cali God” was a dark hypnotising number that drew comparisons to Banks or Lorde; “NOW” her most addictive piece of work featured bright synths from the ’80s — and “RIICH” with its catchy hook and bass drop.

More than half a dozen new tracks in 2017 that appear together on “21st & Motley”, a playlist that substitutes the official debut album while she’s still working on it.

Vera is going to be a huge name in the music industry this future 2018. This young Danish producer is creating the smoothest and sophisticated tracks you can find in the whole world and is poetic justice that his name became used between the today’s music stars.

“Good Job No Conversation” is Vera’s stunning classy debut EP which was released on December 8th and included 7 tracks. All worthy listen especially if you’re a fan of atmospheric music and songs like “Smooth Operator” by Sade, which by the way should call Vera and make an explosive track. If you check both options go to Spotify and change your day for better.

PD: He has collaborated with MØ, Liss and others Danish artists these recent years. But Vera definitely has his own future as a promising producer without the necessity of big stars and huge budgets.

Enjoy Vera’s talent and good luck trying to stay away from tracks like “Mystery”, “Nobody Else” or one of our favourites “Love Hurts”. Don’t say we didn’t warn you.

If you’re a fan of good pop music, you should remember this Canadian artist. RALPH (aka Raffa Weyman) used to spend much of her childhood singing along to music icons like Fleetwood Mac, David Bowie or Prince, and developing a distinctive talent for the sounds and melodies of the past.

Is easy to notice that influences in her music. A unique style that blends perfectly disco, pop, and smooth synth-soul. Danceable tracks that contain strong lyrical histories full of jealousy, lust, deception, and strength.

Immerse yourself in RALPH music and let out all your worries dancing to “Something More”, “Tease” or “Screenplay”.

At the moment there’s no news about an album this 2018, but we hope to be wrong and finally have that RALPH’s debut album full of pop melodies to die for.

Japanese rising star Rina Sawayama, was born in Niigata in August 1990 and lived there until the age of five when her family decided to move out to the United Kingdom.

Rina’s relationship with music comes from her university times when she was in a hip-hop group called Lazy Lion with Wolf Alice’s member Theo Ellis. It was while she was studying Politics, Psychology, and Sociology at Cambridge University when she decided to pursue the music and modelling industry.

In 2013, she began working with London-based producer Hoost and started to experiment with the stage name RIINA. From those days were tracks like “Sleeping In Waking” and “Terror”.

But it wasn’t until 2015 when we saw her releasing the single “Tunnel Vision” when she started to become noticed by the niche of ultra-specialized music blogs. In the same year, she released the cover-track “Where U Are”, a rework of Michael Jackson’s “I Wanna Be Where You Are” (from Michael’s first solo studio album).

At the beginning of 2017, she released her more than good single “Cyber Stockholm Syndrome” co-produced by British producers Hoost and Clarence Clarity. Her debut 8-track EP RINA was released on October 27th.

VoS would describe her Rina Sawayama’s music style as a mix of R&B, Ethnic music and Pop. Melodies for days and a lot of excellent catchy tracks.

Phoebe Ryan is determined to be one of the biggest stars of 2018.

In 2015 she started to become famous because of her incredible and original covers like her mashup of R. Kelly’s “Ignition” and Miguel’s “Do You…”. But soon she released her own material which included “Mine”, one of the best songs of 2015 if you asked me.

After that, she has kept growing and working in her own material but as well for other artists like Britney Spears (“Man On The Moon”) or Melanie Martinez (“Teddy Bear”).

Her latest release was an EP called “James”, which include the irresistible “Forgetting All About You” featuring Blackbear, the moody-slow track “Be Real”, pop gem “Should I” and “Aspirin”. This EP is a collection of songs that tell the story of a relationship from beginning to end.

Until now I haven’t properly written about Phoebe Ryan’s music, although she has been on my radar since a long time ago, i have huge expectation for her this 2018 (please..an album).

These past years New Zealand has earned the right to be considered one of the cradles of modern pop. With artists like Lorde, Kimbra and now Thomston.

Originally born in London, England, he moved at a young age to Titirangi (Auckland), New Zealand. Where he started to take classical piano lessons before the age of 5. By the time he was in high school, he had started writing down his own songs and had competed in music competitions with the intention to begin building his own career. His style contains elements of Alt-Pop, Electronic, Pop, RnB and even Neo-Soul.

But it wasn’t until late 2013, when Thomston self-released his debut EP “School Night” on Soundcloud. Since that moment he has released two more EPs “Argonaut” and “Backbone”, and a hypnotic melodically full studio album at the end of 2016, called “Topograph”.

For 2018 we can expect a bunch of new music (hopefully a new album) and the real breakthrough for this talented artist.

There are a lot of new singers from the United Kingdom bringing quality music for 2018. Isaac Gracie a 21 years old singer-songwriter is one of them.

He’s a fan of Bob Dylan, Radiohead, Pearl Jam, Tim, Jeff Buckley and Nirvana among others. With that influences since a young age is easy to believe that Isaac has a profound relationship with music.

In August 2015, he recorded in his bedroom one of his first songs called “Last Words”, using the iconic PC-program Garageband.

Isaac Gracie is a raw artist full of emotions in his soul and in his music. The fragility but also strength of his music is kinda magic, especially the sensitivity with which he takes his fear and insecurities to empower the music.

rx Soul is a completely unknown artist LA-based with a talent that can be noticed since the first second of his debut track “All The Way There”. In which he showcased a strong confident vocal ability and some interesting references in the production.

That’s all the information about rx Soul, a mysterious artist in which I have enormous expectations for this 2018.

Leo Kalyan is a London based artist which style is described by himself as Oceanic Beats, which maybe means Atmospheric R&B/Pop sound – well, that’s how I described it-.

In 2017 he has released some stunning tracks like “Versailles” (a killer track by the way), “No Man’s Land Pt.1” and “Temptation” among others.

Is expected that his debut studio album will be published during 2018 and I have a lot of hopes putting on this talented guy.