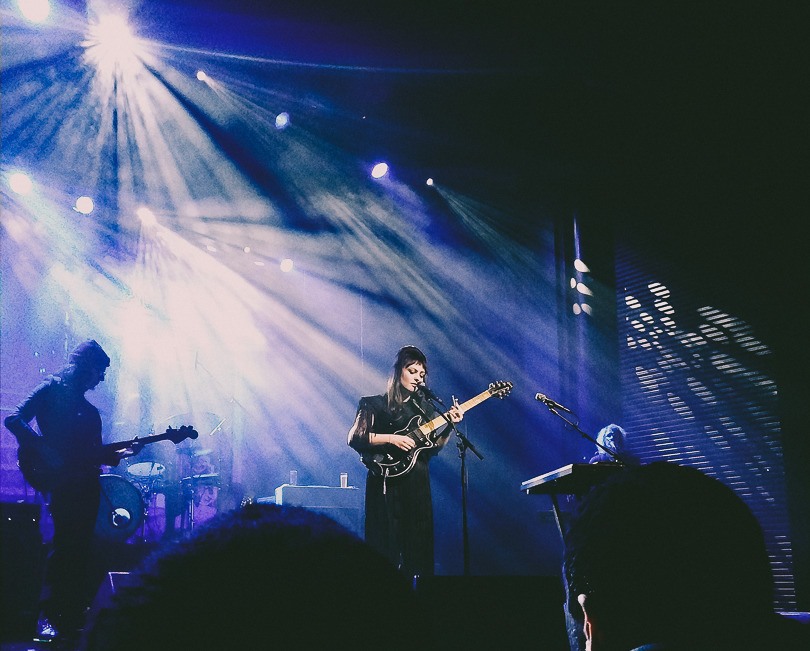 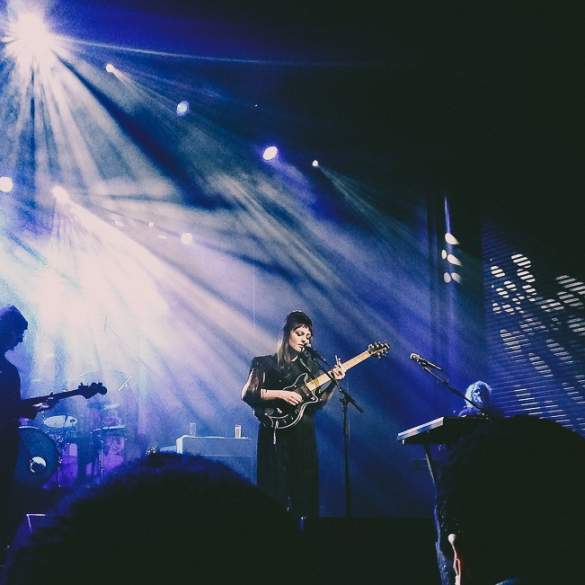 I really never listen to Angel Olsen before the release of her latest album “All Mirrors” (2019) which has been considered one of the best records of the past year and her career. With people like Stephen Deusner of Uncut writing that “Even for an artist who has redefined herself with every record, All Mirrors is her boldest reinvention yet.”

I must admit I was quite intrigued about her powerful voice and those amazing arrangements on each one of the 11- tracks included on the album. So I decided to buy a ticket for her second sold-out show at the Capitólio in Lisbon.

The Capitólio is a small theatre for a capacity of 400 seats or for 1.000 people if it is a standing concert. The place is also exceptionally well communicated with the rest of the city which is a plus when it comes to a show, and the acoustics of the room was so lovely, so it will be a place to go back if they welcome high-quality artists like Angel Olsen under their roof again.

For the first part of the show, the supporting act was Hand Habits, a band from the states. I didn’t listen to a single song from them until that concert, but let me tell you that they were the perfect option to warm up a show like this.

Meg Duffy’s charisma was blowing even if you can quickly feel that she’s a shy person but her little talking moments and the distinctive tone of her voice was quite a revelation. The music was so heartfelt and soulful that just made you close your eyes and move your body slowly along with the guitars and those fantastic melodies.

After a 30-minute set, it came the moment for Angel Olsen, who was accompanied by a sextet of incredible musicians. The good vibes were consistently present between them, making jokes to each other (mainly to Angel Olsen) and really flowing with the music. It was a real pleasure to watch them being so friendly and human, that definitely adds something extra to the show.

The set was quite simple, with only a projection of a Victorian stair and the band in front of it. The use of lights was also quite simplistic but effective as the powerful vocals of Angel Olsen was the main focus of the whole show; there were simply an extra to add some boldness to the experience.

Her vocal control and her ability to conduct the emotional soul of each one of the tracks into the audience was undoubtedly remarkable. The way she looked directly to the eyes of the fans, and let me tell you it was quite a challenge not to be hypnotised by her eyes when she’s singing right to you, was such an intensely emotional experience.

Angel Olsen’s sympathy was also quite likeable. She was doing some small talking among the tracks, showing that although her stage presence can show her as a confident person, she seems to be quite a shy one. Making little jokes about her recently birthday (22nd of January), interacting with the first row public and with the band, she breaks the intensity of the show and her catalogue quite well. Although after that she was always repeating “Okay, now I need to be serious” followed laughs from the band and the public too.

The show duration was 75-minutes, but it feels quite short. A sign that the show flows so well in terms of the setlist and the ability of the musicians that you were a prisoner of the moment until the lights turn on again. The dark rock-melancholic but also euphoric energy during the whole gig was admirable.

A real experience and such a great moment on Angel Olsen’s career which is exploding incredibly with the release of “All Mirrors”, but not get me wrong there’s a lot of people at the concert following her since the days of “unfucktheworld” or “Shut Up Kiss Me”. Showing that her career is not the result of one single piece of work, but eight years of hard work being a solo artist.

Angel Olsen’s European Tour will continue tonight (24th of January) with also a sold-out concert at Hard Club in Porto. The rest of the tour dates are available below: