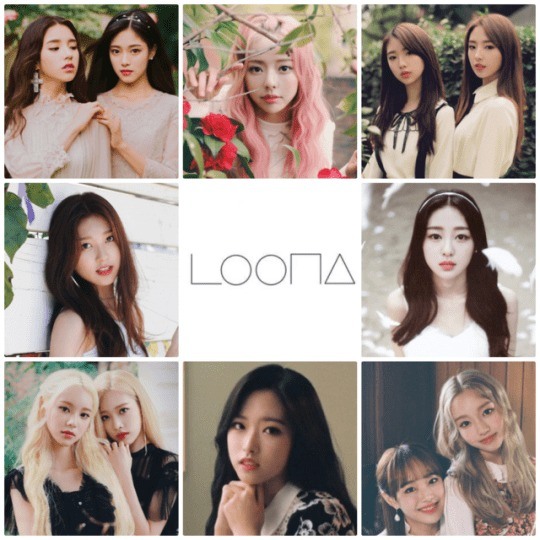 LOONA (이달의 소녀; stylized as LOOΠΔ) is a K-Pop twelve-member girl group formed by the agency BlockBerryCreative. The appeal of LOONA is that every member will initially have a solo debut as a presentation before the group debut as a whole act.

This strategy started in October 2016, and will continue over the course of 18 months. The full-group debut is expected in the summer of 2018.

Every aspect of LOONA has been deliberately designed to build a narrative that distinctively presents the group in such a unique way. Here’s a list of every colour, animals and season that is related to each one of the revealed members of LOONA and their videos:

Curious facts and every specific video about LOONA’s

– Over 50 were trained under the agency to have one of the twelve positions that make up the group.
– BlockBerry Creative has spent almost four million dollars in this group and all the promotion and videos.
– LOONA will release 23 songs before their official debut; 12 solo tracks and 11 collaborations between the girls.

The music videos for Hyunjin’s solo “Around You” and his retro-inspired collaboration with Heejin “I’ll Be There” were recorded in Japan.

The music video for Haseul’s solo “Let Me In” was recorded in Iceland.

The music video for Yeo Jin’s solo “Kiss Later” and his collaboration with Haseul “My Melody” along with that of Heejin and Hyunjin “My Sunday” were recorded in Taiwan.

ViVi “Everyday I Love You” obtained one hundred thousand views in a day with less than four hours.

“Eclipse” was included in the “Eclipse Playlist” that created by the NASA interns for the solar eclipse on August 21, 2017.

(LOONA/JinSoul) “Singing in the Rain”

Jin Soul was the first one to get 300 thousand views in record time.

Shortly after being released the MV “One & Only”, the hashtag “#WelcomeGoWon” was a global trend on Twitter, ranking seventh.

Olivia Hye is the last member of LOONA, being the one who completes the whole concept and history of the group. There are references to the “Creation of Adan” and to “Fallen Angels” on this video.