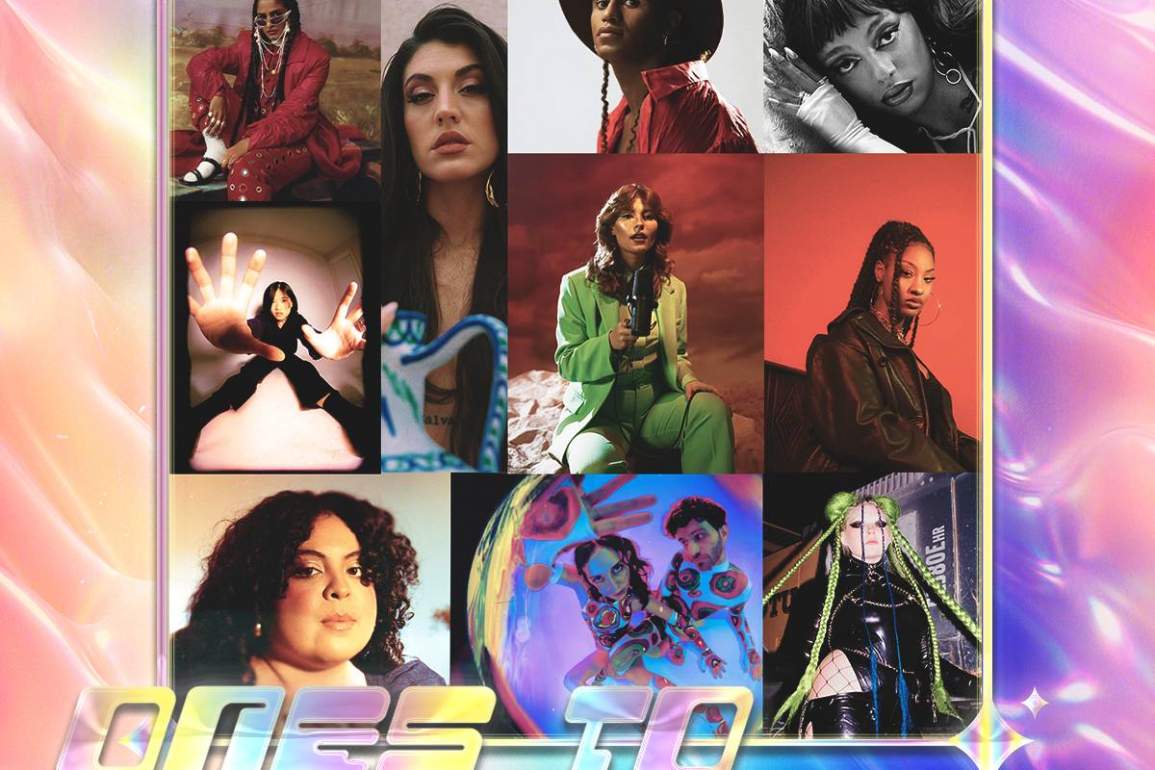 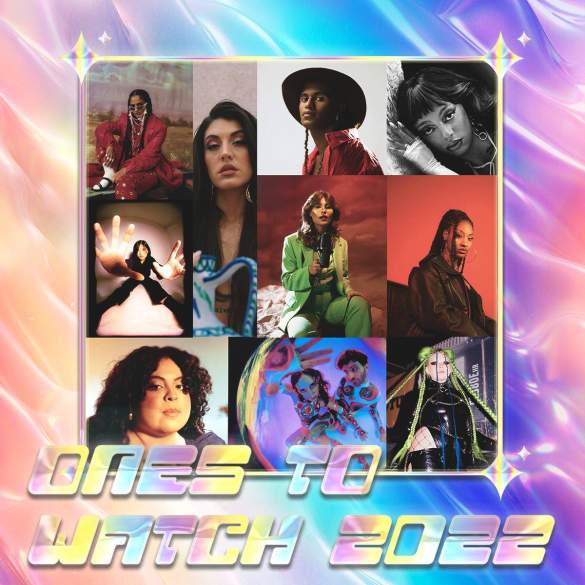 It’s been a few months of silence, reflections and changes. But I’m back in the game, so let’s talk about some music.

There’s no better way to start this new chapter than with a selection of some of the most unique artists that I hope will have a fantastic year of growth and music.

In 2021 I chose artists like Evaya, Mema., Oklou, Arlo Parks, Isaac Dunbar, Alextbh, Dua Saleh, Joy Crookes, Shygirl, Slayyyter, Pongo, Rakky Ripper, Channel Tres and Dorian Electra. This time I have another ten artists from all over the world who are ready to start a new stage in their careers.

Let’s meet my Ones To Watch 2022. But remember, if you like their work, please don’t forget to support them by buying their merch, tour tickets, music and sharing their talent with your friends.

The fearless ambition of Priya Ragu is palpable in anything she does. The spicy hot mix of her Tamil heritage along with soul, R&B and hip-hop influences is a blow of fresh air and a necessary window to a different culture and background that were used to see and listen in pop music.

Her music is a product of a unique partnership between Priya and her brother Japhna Gold. While he handles the music production, she controls the lyrics. The pair have forged a hypnotic blend of traditional and modern sounds that allowed them to fly internationally with their music. In fact, the actual global landscape of music is a perfect opportunity for them to show their heritage and work.

Last year she achieved some serious milestones in her career. For example, she was listed on BBC’s Sound Of 2022, featured on Vogue and released her first mixtape damnshestamil.

It’s almost unbelievable how effortlessly cool and blazing her music is. She can create a unique daydreaming indie-rock experience with her work that indeed makes her stand out among her peers.

As an American DIY singer & songwriter from Los Angeles, she has eventually opened for people like Soccer Mommy, Wet and worked with Willow Smith a few years ago. She started on SoundCloud and Bandcamp, but after years of hard work, she’s now under Ghostly International, which also published her first album Public Storage (2021).

Her sorrowful voice, raw songwriting skills and soft grunge textures of her music will surely turn you into a fan instantly.

Kaina’s music is exquisitely crafted to create an ethereal experience that showcases her rich heritage (Venezuelan and Guatemalan) and her influence from early 00’s soul and R&B artists.

Her lyrics often focus on various themes like cultural identity, family and love, which are the perfect partner to KAINA’s dreamy and heartfelt vocals.

On March 4th 2022, Kaina will release her new album, It Was A Home (via City Slang). Which will continue with her gentle sound that will transport us to a different dimension without any doubt.

A few months ago, I had the absolute pleasure to see Queralt Lahoz live in Lisboa. She’s a force of nature on stage and an artist that irradiates character and uniqueness.

She started to showcase her unparalleled poetic fusion of styles like rap, copla, flamenco and R&B on her debut EP 1917 (2019). But with her latest work Pureza (2021), and her collaborations with incredible artists like Califato ¾, she reached a whole new dimension with her music.

Her authenticity resides in the fact that she’s proud of her working-class roots and birthplace, Santa Coloma de Gramenet (a historical point for Andalusian immigration on the outskirts of Barcelona. But she takes her roots to not only look into the past but also to explore the present and the future with her music.

If you’re looking for an artist who does smooth R&B tunes while serving personality and being himself unapologetically, you should keep an eye on Edsun for 2022.

His music style wants to create a new sound wave in the Luxembourgish music scene, using his background in performing arts to add an extra uniqueness to his craft.

He’s currently a resident artist at Rocklab Rockhal (founding member of Liveurope and other European concert venues). This new creative adventure will take 12 months (so it will end during this next summer), but for sure, we won’t have to wait long to see the results of this next-level experience.

Ponthier was a total revelation last year when she published her debut EP Faking My Own Death on August 2021. An outstanding collection of 6-tracks showcased that her peaceful queer country sound is here to stay.

Curiously in her teen years, she wasn’t a fan of country music until she discovered how a fantastic way to express herself was. Taking that sense of serenity of country music mixed up with some touches of Roy Orbison, Cat Power and Lana del Rey and creating something queerly magical.

Visually her aesthetic is eye candy, beautifully crafted for her sound.

She’s one of the leading female voices from Africa that are slowly conquering the mainstream with their empowering attitude and immense talent.

Temilade Openiyi was born in Lagos (Nigeria) in 1995. From a young age, she was noticed by her music teacher, and she learned to play the piano. She would later practice singing with her brother’s guitar accompaniment.

Her music is highly influenced by R&B and rap artists like Destiny’s Child, Beyoncé, Lil Wayne, Aaliyah, Burna Boy, Asa, Lauryn Hill and Adele. But she started her music career, she stopped listening to any artist in search of her own identity and way to express herself with music. Resulting in the rich, voluptuous deep voice that she has now and her impassioned lyrics.

In 2021, she earned two US top 40 entries on the Billboard Hot 100, with her participation on Drake’s “Fountains” from Certified Lover Boy, and Wizkid’s single “Essence”.

She has slowly built her way up in Brazil as a fierce performance and the perfect representation of a new generation of Brazilian artists looking to represent the country’s diversity both inside and outside its frontiers.

I discovered her uncompromising grunge style in 2019 with “Diaba”. An explosive statement of Urias as an artist and as a transgender person in a country where belonging to the LGBTQIA+ community is almost a death sentence.

Her husky and captivating voice flourish along with aggressive beats and heavily dramatic melodies as she proved on latest work, FÚRIA PT1 (2021), which will have a continuation release on January 13th and the music video for a new song, “Tanto Faz” on the next day.

I cannot wait to see her flourish in Brazil and try to explore other territories like Portugal and maybe some parts of Europe with a considerable presence of Portuguese speakers.

If there’s a duo that needs to be recognized for how they mastered the art of retro-inspired pop music through the years is Magdalena Bay.

The American synth-pop duo based in Los Angeles, consisting of singer-songwriter Mica Tenenbaum and producer Matthew Lewin, has constantly been serving excellent music and retro DIY aesthetics with their work and the release of one studio album EPs and two mixtapes.

Last year they released their debut album Mercurial World on October 8th, 2021. A compilation of Hyper-retro pop material that would certainly blow the minds of any fan of catchy lyrics, earworm melodies and bright fun pop sounds.

She was serving PC-music inspired party anthems in early 2018 when she broke into the music scene, but it wasn’t until recently that she quit her job as a primary school teacher and focused full time on music.

Her wonky dirty pop style is a pleasure to the ears. The playful and obscure essence of her music is quite addictive and intoxicating.

After releasing a self-titled EP in 2021, she’s ready to pivot away from her independent roots and start creating a big new project (possibly with a major label) that will elevate that sharp crispy electronic sound into a new dimension.

Enjoy an extended selection of Ones To Watch 2022 below via Tidal: